DIY for those who lost their lives due to 7.8 Earthquake

Very common news spreading worldwide these days is Natural  disaster which happened recently in Nepal. This is not just another news about it. It has given broad coverage in almost every media. One of our fellow Sinhala blogger who writes "Thilaka Sitha" has questioned that "Why mother natures has chosen this innocent nation who suffer enough with other hazards to stretch herself". I too had experienced minor hazard in parallel. In my case no media has reported it. Therefore, I decided to do it myself.

When having my bed tea(in fact coffee), I used to peep onto  the internet. Perhaps I forgot to keep my cup in it usual place after using it. On that day I have forgotten and left it in the same desk where my Laptop is placed. It was near the mouse pad. My kid when acquiring the the seat in front of it has usually position the mouse pad & its screen pretending changing a driving seat in a vehicle. So she accidentally pushed the cup out from the small strip of wood into the floor making awe-full sound "Slang" which made her scared too. Broken into infinite no of pieces, I found the bigger part like this. 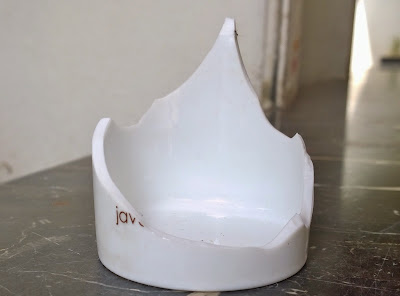 Moment I saw it, I thought could make something out of this. It is our normal practice when broken Crockery or Glassware,  grab all tiny parts very carefully & sweep the area using a broom. Because we always fear if one tiny part left &  pierce your feet. Nevertheless, Sri Lankans (in fact sinhalese) used to call


"Reserve the biggest piece for me"

where ever something of that kind dropping. Even though no one seems to had a look at bigger piece. I admired this big piece though. I thought of making something in memory of Nepal's Disaster. Most of the people don't know these kind of projects are called "Do It Yourself " or "DIY" projects. Whites are different from us in this sense, most of the time they try to do their own work by themselves. Mallika(Need to write different chapter about her) who lived in opposite house of mine married to Swiss guy, once came home with a different guy. He made a part of a garage on his own. But folks around us told something like "This time around she manage to tackle a carpenter there". But the thing is they used to do their day-to-day life things than ours. Therefore, in Europe these DIY concepts are popular. I am not going to  explain in detail as combo of pictures are here worth thousands of words.

After removing tiny pieces, largest one left was in above picture. If my Mother, Father or Sister were present, they should have scolded me already saying "through it away, will hurt you. Shouldn't keep objects like these in a house where children are there". It was good time they were not here. I have enlighten my kid already saying "We are going to make something out of this, but one thing, you don't touch this until I do". Having said that, I knew for sure, she wouldn't even look at it. It was there for few days. Even I was little bit scared. 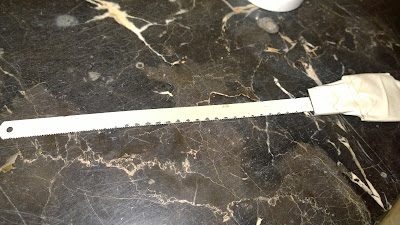 Since last saturday I rarely found a day off, I wanted to give this some meaning. First of all it was necessary blunt the sharp edges. So I used hack saw blade show above. Even a  Sand Paper or a Metal File will do. If you use Sand Paper, you need to be bit cautious since these edges are sharp enough to pierce the paper. You don't need to round the edges. It's only enough making them blunt. Don't forget to collect those small pieces. Better sweep them to a dust pan and then to a dust bin. 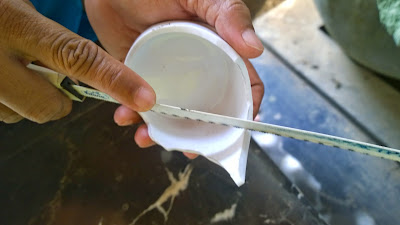 Looking at this you would have thought "what is this ?". This is Double sided gum tape. What is the use ? Let's see. 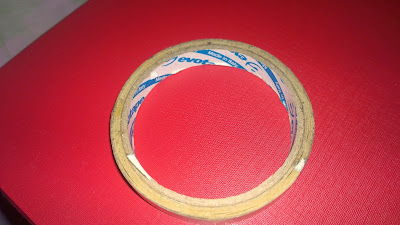 Ash shown below cover entire surface with the gum tapes. After applying it into full surface, then remove paper other side. 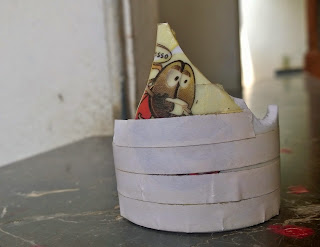 What do you think now ? Feel very sorry about it ? Otherwise you would want break your's and get a similar piece ? But don't try, since you won't get similar parts in each instance. At times pieces remaining looks so terrible. Please don't think to keep such. Other thing is don't make these kind of souvenirs if you have smaller kids as they always through them here and there. It is injury prone. 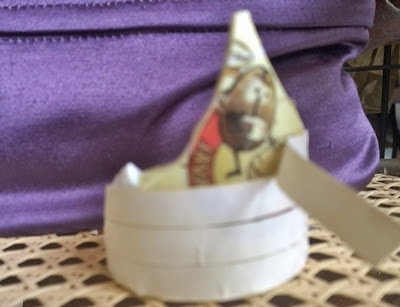 Now remove all un-sticky tapes on the other side. I know of a common question in everybody's mind. What we are going to do ? Well, we need to draw an art. What I have are fabric paints where they won't grab the glazed surfaces like these well. In this case glass paints are useful. But as far as I know they won't cover the surface fully. Instead they are transparent. Since I want to colour background, and have fabric paint, we need to cover the surface with a fabric. To stick them well into this broken cup, Double sided gum tapes are useful. One can think of using a glue available in the market will do. Super Glue may be OK. But other glue solutions will make spots here and there and won't distribute evenly. 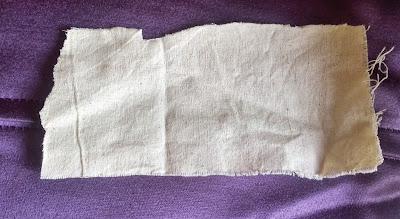 Fortunately I could cover the area I wanted with this piece of raw fabric. Look at the picture below. Do not forget to align centres of both together first. Then stick them outwards.  Now have a look after that tricky part of the work. 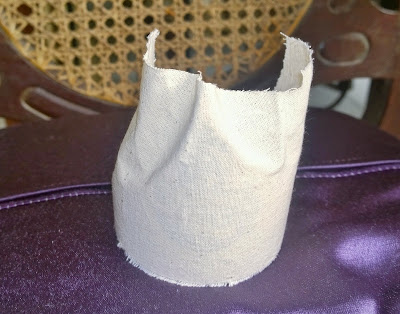 No gently cut the unwanted parts away. For that you need sharp yet slim cutter. I have tried it with a pair of scissors, and did not work. Old razor is very much useful in this case. But you need to be very much careful when dismantling it. Those blades available in the retail stores will also do when broken them into two equal pieces by folding. When you doing these kind of risky things make sure your kids are not around. At the end make sure you keep them in a safe place where your young kid could not reach. 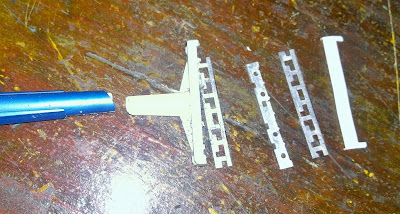 Now let's look how it is after removing unwanted parts of the fabric. One could think it is almost similar to a Crown or a Tiara. Yes you can paint it like one of them as well. But my mind suggested a broken brick wall this time. 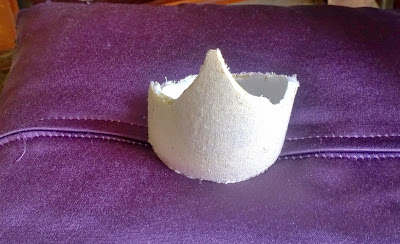 Initially I have pencil sketched like below. But later realized the fact that, it is better paint background colour first and draw the rest. 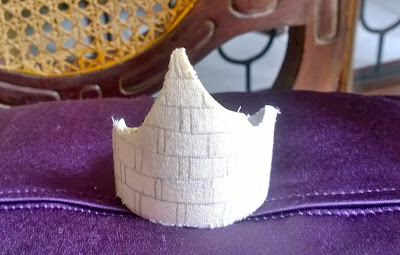 Picture below show the broken brick wall after painting work is over. Problem is, I have forgotten to capture some pics during the paint as my hands grabbed some paints. 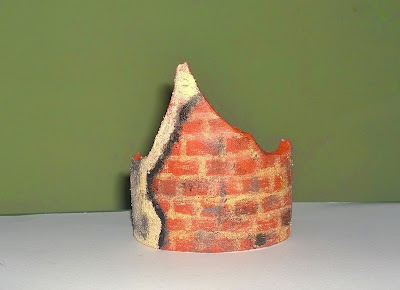 Picture below show it in different angle. Does it looks like a brick wall among junk? 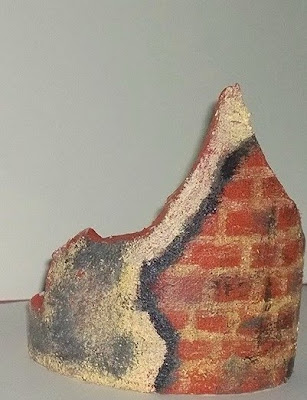 When you look at it from far, it looks like as shown below. I got this view when I watching television from far of this.

Other side of this I have written small note as shown below. 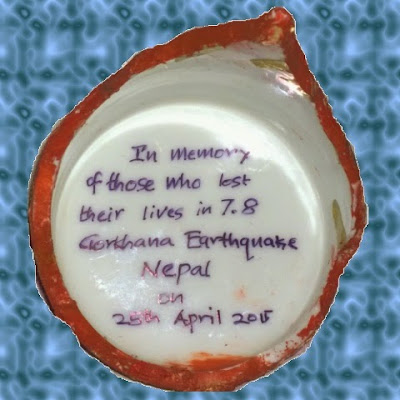 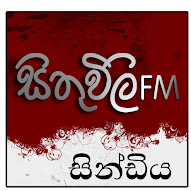